With 4 trading days remaining for August Expiry and trades deeply in the red it is alright for the doubts to come to surface. It is normal to start thinking whether we did the right thing.

The answer is — We were wrong. We make loss only when we go wrong. The reason maybe our mistake or a sudden market move but the final responsibility is on the trader. It is my money that is lost and I am the person responsible for the loss.

These are the some of the comments I would like to highlight before proceeding further.

These are doubts. Genuine doubts

I mentioned about learning from our losses. Dinesh wants to know what are the lessons learnt if we end up losing on Thursday.

Sailendra wants to know the probability of winning of a naked option buyer.

Shrikant has partially replied to Sailendra talking about high volatility and reduction in volatility.

Remember, we are up against very strong conventional market wisdom.

Most of the Option Buyers lose money.

80% of the Options expire worthless.

So what do we do?

Throw in the towel and sulk. Give up trading and permanently join the rank of losers.

We do not have to source our thought process from the losers. Having the belief of a winner is a must.

This is the start position of 100m Finals in Rio Olympics. 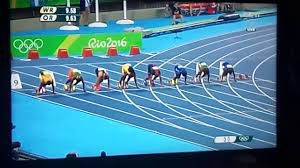 8 Athletes going for the biggest race of their life. In 10 seconds one of them will be crowned CHAMPION for 4 years with his name in records forever. Other 7 will fade away from public memory. All the 8 know this fact. They know 87.5% ( 7 out of 8 ) will fail to become the Champion.

Do they give up?

Do they not try and give their best?

They give their best effort for 10 seconds and this is the result. 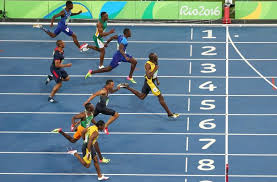 Usain Bolt sprinting away from the others to Olympic Glory.

Reward of success is great.

We know that chances of success ( probability ) are less. But when successful, the feeling is top of the world. We work to achieve that goal.

We had achieved very good results in the past 3 months i.e. May, June and July.

After 3 very good months, it is normal to have one bad month. Losses hurt and they should but we know the fact that losses are part of trades.

It is important to have a method and belief in what we do. Success depends on many factors, most of them beyond our control.

Look at the results of 2017 World Athletics Championships 100 M :

Usain Bolt in 3rd Place. It was first time since 2007 that Bolt had lost in a major event.

Rather than focusing on Bolt’s defeat, I would focus on the WIN by Gatlin. After being in the 87.5% for so many years, he finally came first out of 8.

That is what champions are supposed to do.

Sometimes champions lose and that should not be the reason to throw in the towel and get out of the field.

It is immaterial how many times August like situation occurs. As long as we make good profits in the months when our trade go right , we can take few losses in our stride. When Usain Bolt can face defeat, we are very ordinary mortals.

To Dinesh my reply is that every loss is a lesson. We learn that:

No method is perfect.

Losses are inevitable. We have to take good profits when the trade goes right.

If we fail once, it is not end of the world. We have to keep on trying. Ask Justin Gatlin . How many years he chased elusive Usain Bolt before finally winning ? He never gave up and was ultimately rewarded.

To Shrikant I would say that we must analyze like he has done. But every analysis is only 50% true. Positions can change in just 2-3 days. we still have 4 days to go and if something similar to June 2018 happens again, I shall be the happiest person around. But let us accept the fact with grace that we have been wrong this time. Being wrong once in 4 months is not a disgrace though any loss is not good. We hope to correct the situation next month.