Started high, gave up the highs, went negative, moved up again, did it twice and then collapsed in the last 30 minutes. There was no indication of the sudden fall. We were the interested party who would gladly welcome such a down move but did not see it coming.

The above picture does not capture the drama of the day. It is just a static number.

The chart for RELIANCE tells the story in the right manner. 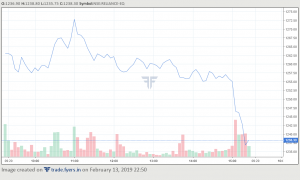 Look at the ferocity of the decline in the last 30 minutes. It was same with NIFTY. We do not have a trade in this stock but we know that a decline in RELIANCE is something which the bulls in the market never wish for. When it was trading near Rs. 1270, the talk on TV was about 1400 and beyond. That level may come sometime in the future but for the day it was a sorry end to the story.

Our trades did not do wonders exactly but moved somewhat in the direction we wanted.

M&M again made a 52 week low. It again moved a little higher. I am okay with these kind of moves as long as it keeps closing lower than the previous day. I am still looking for levels below Rs. 630. Let us see when we get there.

HINDPETRO did well today but we need this stock to move below Rs. 220 tomorrow and then below Rs. 210 as soon as possible.

L&T came down to Rs. 1211 level and then recovered slightly to close 2.2% lower. Another day like this can be very useful.

BHEL too did its part and was traded at Rs. 61 at close. We are very near to being in the money.

IDEA went wrong today. It is still a profitable trade but lost some of the profit.

ZEEL suddenly went down to near Rs. 386 level. Equally sharply moved up to Rs. 417 also. Closed between these prices and we get nothing from all these volatile moves.

GRASIM did nothing. Moved up, moved down, stayed at same levels.

This is how it looks now:

The main concern now is the number of trades and the money involved. We would not like our money to be lost from this point. The first step is not to take any more trades before cashing some profit. That action will be guided by the market.

Let us move out of M&M PUT 660 when the price reaches Rs. 25-26 level and enter PUT 630. That will book some profit and we shall be in the trade for further move if the trend continues.

Also keep a watch for sudden erratic moves in any of the stocks ( our trades) if it is in our direction. Probably there may be some opportunity to exit. If the move is against us, we know we can not do anything about it.