The first day after June Expiry was an emphatically positive day.

NIFTY was up by 125 points. A real big move after two days of being down. But still we are going nowhere. And I do not care.

Like I said earlier, we are more interested in what our stocks do. If they do what we want unmindful of NIFTY moves, we are okay with that.

While we are talking about NIFTY let me add one observation. I may prove right or go wrong but it is necessary to share this observation.

Here is the list of Top 5 Gainers and Losers in NIFTY stocks on the day it gained 125 points. 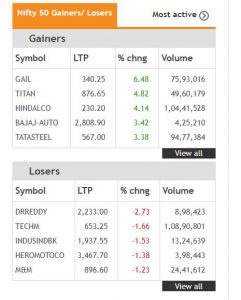 In the Top Gainers, we do not see any of the 5 top weighted stocks.

Similarly in the Top Losers also, none of the 5 top weighted are seen.

Absence of the big shots from the Top Gainers suggests that heavy weights are not participating in the rally. If that happens to be true, then there may not be much upside left.

If these stocks too join the rally, then we may see our PUT trades going wrong.

For me the message from this data is that we may remain range bound for a while.

Enough technicalities. Let us cut the crap and get down to the business.

Friday did not go well and we start the July Expiry Trades on the back foot.

All the 3 mentioned trades were available in the price range suggested. At the end of day, they were lower than the buy price. It happens. We live to wait and fight another day or another week.

The trades were taken at the following prices for the purpose of keeping record.

I am taking these prices from one of the comments. My trading prices are almost same.

NBCC was not suggested here.

So we take the prices as:

While NIFTY closed near the high point of the day, BANKNIFTY came down considerably from the high point. At one time it went slightly negative also.

INDUSINDBK was the big banking loser. SBIN also came down from the highs.

As we are already into 2 Bank stocks adding another to the list is like putting all eggs in one basket. But seeing weakness and not acting upon it also looks like missing an opportunity.

In June Expiry, SBIN came down from the highs to end up at Rs. 257 but our PUT 250 became worthless.

I expect weakness to continue in SBIN.

There is nothing to suggest that it will not make that journey again.

And why leave out RELCAPITAL.

It gave us decent profit in June, we may look for some more in July.

With the addition of these 2 trades, our total trades come to 5.

Let us stay with these 5 for a while.