NIFTY ran up another 70 points yesterday.

It had gone down by some 20 points in the morning and the trades were looking nice. Just when you think life is good, market does something to throw everything out of gear. The up move started and it remained that way for rest of the day.

This was NIFTY for the day. 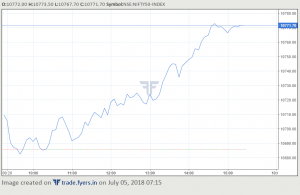 With 5 PUTS already traded and another 2 suggested for the day, this move could put paid to our hopes of any profit. We should be running for cover.

Another issue is that out of the existing 5 PUTS, 3 are from banking sector. BANKNIFTY was under performing the NIFTY almost on daily basis for the last 3 days. Yesterday this index too decided to match NIFTY stride for stride. Their chart for the day looks almost identical. 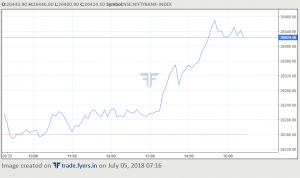 But strange are the ways of the market.

This is how the three bank stocks performed:

Two of them were flat and one was actually down.

PUTS lost some value but it was not an absolute disaster which could have happened with such a rise in the Bank NIFTY index.

VEDL opened much lower than previous day and the trade ( PT 220 ) was not possible at the suggested price range of Rs. 4.00 -4.80. So this trade is not considered for the purpose keeping record.

Among the other trades, BHARTIAIRTEL did well to stay in the negative on the day when NITY was up by 70 points.

Please take note of the fact that many stocks in which PUTS are suggested over last two months are making 52 week lows with some regularity even when the main index NIFTY is almost flat or even in up move.

Good for us if it keeps happening.

Here is the chart at the end of day yesterday with VEDL mentioned but not accounted for.

We stay with the same 6 trades for the day.