Yesterday was a strange kind of day.

In the beginning it was expected that like rest of Asia the markets will open lower and stay lower. NIFTY did just that initially and then made a handsome recovery to go marching into the positive zone.

But this picture does not tell the story.

It does not tell us the volatile way in which it happened.

Here is the chart: 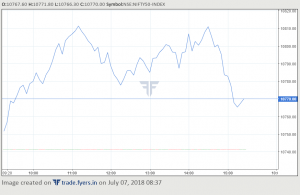 See the peaks achieved twice and then the fall in the last 40 minutes of trading.

Most of our stocks followed the same pattern. Went very high and then came back considerably to leave us with a good losing status but with hope.

Let us look at one of the trades which is not doing well.

When we enter an option trade it is generally All or Nothing trade.

So far this trade is moving towards nothing. Seeing that happening hurts. The simple thing is that we have gone wrong presently. Either the market will prove us right at some point of time or we lose the premium.

Here is the price move over last few days: 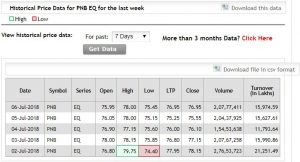 Every day, it goes lower , then makes an abrupt up move towards Rs. 78 mark and then gives up those gains to end either lower or higher. These kind of moves do no good for us. They just eat away the premium. It is not because we bought the PUT, those with CALL also would be seeing the price going down. This is the type of price movement which benefits Option Sellers.

But everything can change in one day. Like it had changed on Expiry Day ( June 28 ) last month.

Here is the price movement for that one day:

It is a matter of keeping the faith and market obliging you.

That is when it looks like that now it has become worthless. Many traders give up and quit. Quitting gives them Rs. 1200 back out of Rs. 9600 they had put in. I do not give much importance to getting back something out of a worthless trade.

Then the stock started moving down. At first slowly and then abruptly on Expiry day as shown above.

How many of us stayed with the trade?

There were chances to get out at Rs. 1 and Rs. 2 and so on. Few traders with patience would have got out at Rs. 2.40 and made it break even. But the profit was to come only in the last two hours before expiry.

This is what can happen with option trades if the market does it right for you.

It is normal to get worried. Do not make it normal to give up hope and belief.

In the worst case, we lose the trade. Some other trade will make money for us.

I said in the beginning that the day was not good for us. Even the stocks which lost some value did not give anything by way of increase in the PUT prices as the time eats away the premium.

So we end the week in negative territory.

We look for better results next week.