NIFTY continued with the down move of previous day.

In such situation PUTS should have done well and few of them extremely well.

I shall post a detailed analysis of all the trades over the weekend. Today we shall just do a quick recap.

Stars for this month were our PUTS in UPL and BHEL. Their performance was followed by PNB and to a lesser extent by RELCAPITAL. IDEA too proved to be a good idea and gave some profit in PUT 60. We could have cashed out a little more in IDEA trade but it recovered at the end of day today to give away most of our gain.

The success in these trades did not come easily. It needed a lot of patience and luck at the right time. Same move a day later would have been of no use to us. That is the problem with options. But having chosen to trade in options, we have to take good with the bad and live by the rules of trading.

Finally a pretty picture for our trades.

Again it is necessary to emphasize that it is not the number of right trades that matter but the profit you derive from them.

Over last two days, we had mentioned few trades keeping the Expiry in mind.

Every trade went right. The best of them actually could not be initiated at the suggested price so I have not counted it for the purpose of results. But if someone entered that trade at around Rs. 5.00, there was money to be made as it ended up above Rs. 28.

Anyway, let the picture speak for itself.

Even without considering HINDPETRO PUT 290 trade and giving back some of the profit from IDEA, we are in profit by Rs. 30576 on a money outlay of less than Rs. 15000 for these trades.

Combined with the earlier trades this adds up to a total profit of Rs. 85883 for June Expiry month.

I doubt if some readers have booked full profit to this extent. Even if half of it could be earned that is good enough.

It is not the option trades which do not give profits, it is the traders who miss out on them.

For the new readers, I would like to indicate the status in May Expiry.

In May, things never got so bad as they had done in this month. Not a smooth sailing exactly but compared to June it was much easier.

Various series going on here started with the main theme that picking stocks for trading is simple. You do not have to be a rocket scientist or expert of any kind to pick trading stocks. For the fourth month now our selections have done extremely well.

The benchmark for judging the performance is the Futures Trades.

We have compliled the charts which indicate the status if Future Trade was taken — Buy in case of CALL suggestion ans SELL in case of a PUT suggestion– on the day the Option Trade was suggested.

In this Expiry Day trades in Options are not considered because that will make the result too favorable for us and we do not want to be over confident. Confidence in the method is fine, overconfidence can spoil the game.

Here is the result with Futures Trades: 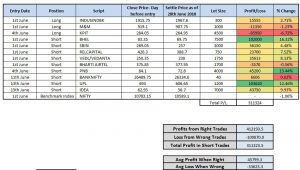 For a method to succeed every time in 4 months whether NIFTY was going up or down proves that simplicity in trading actually works.

With this we close June Expiry on a high with our gratitude to the market to act in our favor just in time.

We approach July Expiry month with caution, hope and expectations of good trades.