When the index was up slightly, TECHM and NTPC were in the red. Both gained later in the day to emerge positive. NIFTY was up by more than 100 points in the day, but INDUSIND did not give a great return.

On the other hand, stocks in the SELL list, decided to move up with a vengeance.

This is the trouble with writing on a public forum. You are open to criticism and even ridicule. But one has to take good with the bad and stick to your convictions.

Only SBIN did well for us. HINDPETRO had gone down by more than 1% at one point but recovered to cause a little problem for us.

But anyway, it is for the markets to decide what to give us.

Let us have a look at the results for the day.

All the three did well. They were supposed to do so on such a day, but took a long time getting there.

That makes me have some doubts about this rally or whatever it is. 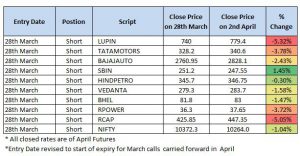 This is what the trouble is. LUPIN and TATAMOTORS ran up in a big way. So did RELCAP.

Only SBIN gave some solace by moving down.

But we are not in to day trades. We wait for next day and see what happens.

I am not turning into a market predictor.

It is good fun to read what they write.

This is what was available on Moneycontrol website this morning: 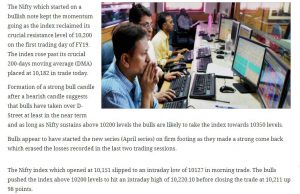 Try to take out some meaning from this.

And this was written after Dow Jones had gone down by about 2% the previous night.

This is what SGX NIFTY looks like at present:

The real action happens when the markets open. But it is an indicator for the likely open.

All red, though slightly better at this point of time than one hour ago.

So indulging in the games to predict the markets is no great game. All the theories can go for a toss.

Our selection theory also went for the same toss yesterday, let us admit the fact and move on. Let us see how things work out today and if necessary , we take our lumps and dump some of the selections.

Have a great day.

Option Buying Profits — Why Do Traders Ignore The Easy Way?