NIFTY made the new All Time High during the week.

It appears that these ups and downs will continue but overall trend seems to be positive. But index being positive does not suggest going all in with CALLS because individual stocks are exhibiting different behavior. Some continue to stay weak. Some show sudden bursts of gains followed by a steep decline and then some gain. Banking Stocks are doing this for last one week. It is not easy to read such market.

For Option Buyers life in the market was never easy. At such times, it becomes more difficult.

It does not matter whether you bought CALLS or PUTS; both can lose money at the same time.

Let us look at Our Trades :

We are in 7 trades now. 1 CALL and 6 PUTS. The market is on the up all these days. It is normal to lose money in this situation. Even the CALL is a loser because of the movements being both sided in INDUSINDBK.

The position as on Friday was:

We have crossed the risk threshold of Rs. 50000 with these 7 trades. It is enough risk for the month specially when the trades are not going our way. We shall not be entering new trades till some of these begin to show positive results. There is always a chance of every option becoming worthless. One must always remember this fact.

In this expiry, 12 trading days are remaining and that is enough time for some of the trades to come good.

One of the readers Mr. Yogi had this to say few days ago: 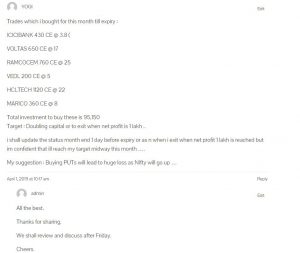 Confidence is a good trait. Over confidence is not. Market is a great leveler. It keeps on telling all of us to be cautious and not go overboard with the risk.

I had replied to the comment that we will be reviewing the trades after Friday.

Surely the market has gone up after that as expected by YOGI.

But did that going up make money?

Both sets of trades can come right and both can go to ZERO.

We should not be trading options in a stock like RAMCOCEM which does not have any liquidity. There were no contracts traded over last two days. How does one get out of such a trade even if it is making money? 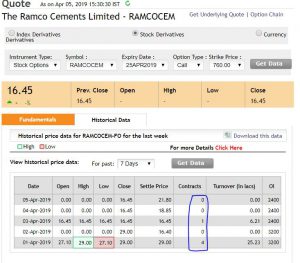 That is why looking for liquidity is important.

I wish success for our trades as well as for our reader Mr. Yogi but would like to advise all the readers not to go all in with your entire risk capital at one time. If things become bad, it becomes too hot to handle.

Be back tomorrow morning.