Really tough to explain why it went up and then what made it give up all the gains.

The earlier post was written on June 08 morning and NIFTY had closed at 10768.35. In two days of trading, NIFTY has actually gone nowhere.

In this sideways movement it has caused a big loss to all our Option Trades.

Price too has gone away in some of the trades while time decay is the main cause in the likes of VEDL.

Now we have 13 trading days left to manage the trades and see if they become profitable. It is here that all the qualities of a trader are tested.

I will repeat these qualities for the new readers:

Having the belief that your methods are right and can be profitable.

Knowing yourself as a trader.

It is in such situations that our patience and belief are tested.

For me it is a regular experience though not a happy one. It is not easy to see your profitable trades turning into losing propositions. But this too is part of trading, a very important part.

It is normal to feel elated when trades go right. I have been posting about Selection Process and the selections since February 27/28. We have so far covered March, April and May Expiry and selections over these three months period have been quite successful.

Actually the selections in April Expiry behaved in exactly same manner as in happening now in June. All the profit came just few days before Expiry. Do we see a similar pattern?

But it is tough and very difficult to endure.

Let us have a look at the not so pretty picture.

As of now only 1 out of 9 trades is showing a profit. A real bad performance.

The readers would be right if they express anger, resentment or downright ridicule. All it takes is a losing month to lose previously built credibility.

Fortunately, the readers have shown exemplary restraint  and I have not received any bad comments so far. Some have expressed their views on SBIN, BHARTIAIRTEL and few other trades and I respect their views. That was the purpose of this whole exercise of the Selection Method.

That price was not possible on June 08. Let us take it that the trade was executed on June 11 at Rs. 160, though it was possible at lower levels too.

A small consolation. We are having 2 out of 10 trades right.

Well, another day of wait and watch for me.

Let the markets give us our right dues. 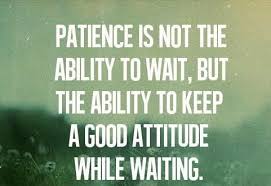 Let us wait with the right attitude.