In this blog, we have always maintained that selecting a stock for trading is not really a tough task. In fact it is very easy. You can do it by any method, random or involving some research. At the most one will go wrong and lose some money. The real difficult part is staying with the trade when it works out.

The problem does not lie with the wrong trades. Traders continue with that. It is the trades which go right are real problem. Traders do not know what to do with these trades. Whether to get out or not? How much profit is enough?

And generally there are no answers forthcoming for such questions.

I would suggest staying in a trade for as long as possible , maybe even for two /three years. After all, any new trade will have similar chance of success or failure. So why not stay with what is going right?

Traders like to be active even at the cost of losing money.

Let us see how some selections have performed over a long period. 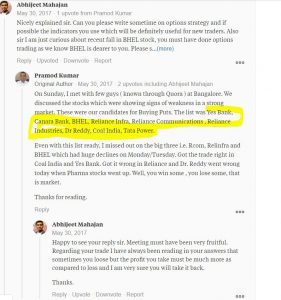 The above image is conversation in COMMENTS to one of my answers on Quora. The comment was posted on May 30, 2017.

The first comparison was done after almost 3 months. The status in August 2017 was: 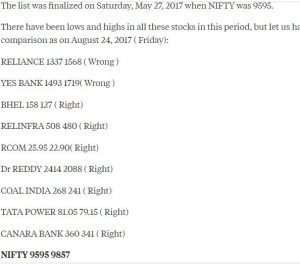 After 3 months, 7 out of 9 short selections were right while NIFTY had moved higher in that period.

All the other 7 stocks are down , the biggest fall coming in RCOM and RELINFRA. BHEL and CANBK are also prominent losers.

The best part about these selections is that that 7 out of 9 stocks have fallen when NIFTY has been going up all the time.

Staying short in these trades would have given profits even when the market direction was wrong. Just imagine the results if NIFTY were to go below 9595 level which existed on May 26, 2017.

We all can make such selections. Do not think too much of it.

Good stocks keep rising and bad ones keep falling. I think these selections are a good example of this fact.

For the Quora comments :