Volatile Friday — Was It Bad ? — It Was Nothing

Many readers have commented that they had never seen such a day.

Most likely they are new traders. Many in the media also made similar sounding statements. These are the people with blinkered vision. They have forgotten all about the year 2008. It is not fashionable to talk about market falls. Buy we can not close our eyes and shut out the truth.

Let me show you how volatile the market could be and how brutal the falls have been in the past. 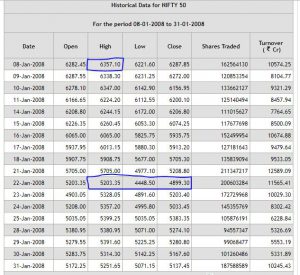 Do not tell me it can not happen.

It may not happen. I agree.

If you think this was bad, I am telling you it was just a preview.

Well, here I can say — I have never seen anything like this before. 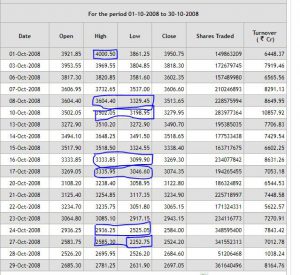 And then the real crash happened.

Just imagining this kind of move now gives me shudders.

This kind of move from recent high would take NIFTY to 6703. How does that sound for comfort?

Again it may not happen.

The days highlighted in the above image are the days when NIFTY showed a volatility of about 10% or more in a single day.

Is A Crash Likely? :

Only one bankruptcy has been exposed yet. (ILFS)

Many are hidden. The infrastructure sector in Roads and Power is the real non performer and all the balance sheets are just plain lies. So are the balance sheets of their lenders. If they become public knowledge ( if our armchair TV anchors speak the truth for a change), we can see a big correction.

If we keep our heads buried in sand like we have been doing for last 3-4 years and keep believing in the hype , it will be alright for the present but then we may see a huge crash few months later.

Facts have a way of coming to surface however hard we may try to brush them aside.

This was my take on the mildly volatile Friday trades. Compared to what we have seen in the past ( and may see in the future), this was really mild.

Let us be watchful about what happens next.